There was a recent story about NBA and San Antonio Spurs legend Tim Duncan losing over $20 million in investments. He got advice from a certified financial planner with a conflict of interest, and now that money is gone after the investments tanked.

This has the potential to have many people scared and worried about their own financial planning and investments.

Between 2005 and 2013, Duncan hired a certified financial planner to help him with investing money. The advisor reportedly recommended investments which ended up causing Duncan to lose over $20 million.

Duncan, a 15- time NBA All-Star, sued his former advisor in January 2015, saying that he recommended investments that he had financial stakes in without disclosing that information.

Even with the loss of $20 million, Duncan, who has made around $220 million, has said that the loss, although “a good chunk,” will not be a factor in whether he returns for a 19th season in the pros.

Duncan’s next quote is one that puts things in perspective for everyone.

The bottom line is this: You can’t be angry at yourself. I keep going back to this word, but I trusted someone. I was wrong about it. I got screwed over for it. I’m not mad at myself for that. That’s a lesson learned. I’ll never put myself in that situation again. I’m a loyal guy. I’m a man of my word, and I assumed other people would be that way. That’s just not the case in life.”

First of all, I wish I was in a position where I could lose over $20 million and basically say, “that stinks, but oh well.” If someone owes me even five dollars, I end up continually asking them for it, and this man just lost over $20 million and says that it’s not going to affect him.

Second of all, I would just like to point out and applaud how calmly and well Duncan handled this. This man, although it is established that he is set for life and this won’t change his plans, just lost seven figures of money.

I can think of several players, and even more people in general, who would be publicly enraged, (As a side note, I’m sure that he was not a happy camper when he found this out, but he has had a while to accept this since the lawsuit started in January, and Duncan is generally a pretty collected and cool-as-a-cucumber kind of guy), and here he is saying that it’s a lesson learned. I probably won’t make that much in my life, and he says this is a lesson learned about life for him.

Third, this is something that can apply to everyone. Not the $20 million part, but the “not the case in life” part.

Duncan said, “I’m not a speech guy. I’m not gonna go out and preach to people. I’m not going to go on a circuit trying to warn people.” So, if I may, I’m going to do just that for him.

It’s important to see a professional and get help handling your money, but it’s also important to do your research so you are in the know as well.

It is also important to know this: 99 percent of people out there are good people that want to help you. The problem is you only hear about that other one percent of financial planners.

Duncan’s story is  just a reminder that these things happen. No one wants to see these sorts of things happen, but sometimes they happen nonetheless. It’s a risk, because you are putting trust in someone with your money.

When you are hiring a certified financial planner, make sure you have someone you trust. Make sure to keep your head up, your eyes open, and on your toes, and make sure your trust is in the right place.

Your money is important, and so is your life. Not everyone can lose money and be able to shake it off.  Make sure you do your due diligence, that is all. Just make sure you will be okay by doing your end of some research. Usually, people wouldn’t mind being Tim Duncan, but this is the one case where you can hope to not end up like Tim Duncan.

At Medallion Financial Group, we believe financial planning is about Family. We have been helping families invest in the future since 1987 through a holistic planning approach. We recognize there are a variety of needs when it comes to retirement planning, plan rollovers, annuities, college planning, life insurance options, and investment management. It is easy to get lost in a sea of choices. Our financial advisors help with the basics and beyond to enable our clients to get the education, advice and management they need to retire with confidence.

Our focus is twofold: first and foremost, we are fiduciary advisors. We stand against any violation of laws, values, and ethics. Second, we treat our clients as part of our family, not only those who call Maryland and Georgia home, but clients across the US who have benefited from our reputation of personal service, integrity, and expertise. 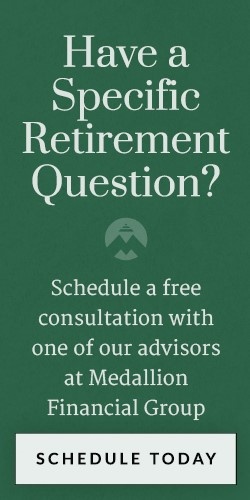